Are You Tough Enough for Tough Mudder?

OPTI’s March Client of the Month, Jay Groomes, recently completed the Tough Mudder obstacle course. I asked Jay to journal his experience to share it with all of you and hopefully motivate you to realize your great potential and capabilities. Here is Jay’s Tough Mudder Experience in his own words.

Are You Tough Enough for Tough Mudder? 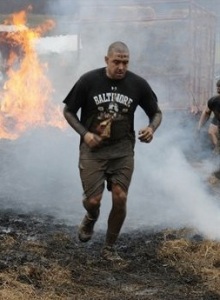 On April 10th, 2011 I participated in my second Tough Mudder event. For those that are not familiar with Tough Mudder, it is a 10-12 miles obstacle course that is designed by British Special Forces. This obstacle course, however, is not your average challenge; it is not a walk in the park, nor is it just an average road race. This course is designed to test your strength, endurance, camaraderie, and mental attitude, which is also built around you finishing the course and not worrying about your personal time.

Last year I was approached by a good friend to join their team for a Tough Mudder event that took place in November 2010. Initially, I took this course as a joke. I figured it would be a social type of thing where people are just getting together, hanging out, and doing a few goofy things around a big course. Lo and behold, that was far from the truth. This course took place in Englishtown, NJ in the middle of November. The weather was 38 degrees and our wave started at 9am. Keep in mind, there was water involved, which meant the water temperature was around 20 degrees. Before the gun went off, I got a shocking thought, “This is not a joke”!

I instantly found myself engulfed in the seriousness of the moment. Don’t get me wrong, there was plenty of teams having a good time, but the difference was they had done the before-and we were brand new to the challenge. About three miles in I started doubting myself, but my team pushed me along which gave me a much needed second wind. As we approached the third obstacle, “Walk the Plank”, I hit the water and everything changed. I felt disoriented due to the coldness of the water and could not recover for about a mile.

After running the “Mud Mile”, which was about 6 miles into the course, I started to experience cramps in both calves, bringing me to my knees in pain. I tried to fight through it, but that is when the mental element set in and I decided it was best for me to pull out of the course. Needless to say, Tough Mudder beat me and proved that I was not truly prepared for such an event. From that point, I promised myself that it would not beat me again.

In January 2011 the same friend approached me and said, “Are you ready to complete Tough Mudder?” I instantly said, YES! From that point, I was determined to try and put my best effort into training and mentally preparing myself for the event. For the past three months, I trained with Kettlebells two times a week to build strength and power and I also trained Metabolic Conditioning one time a week to build endurance, speed, and agility. As for the mental aspect, I surrounded myself around positive friends and family that would motivate and push me to see this event through.

This time around, the event took place in Allentown, PA at Bear Creek Ski Resort. When we arrived at the site, the intimidation factor set into mind. But, I was completely focused on completing the course and pushing myself to the finish line. Our wave time was set for 9am, so we were the first group of the day to attempt the course. Before the gun goes off everyone is so amped up.  You can literally feel the energy and anticipation throughout all 500 people who are set and ready to take off at the sound of the gun. Next thing you know, BOOM! Everyone is screaming and charging off to the hills. Within my first three miles I felt great! I had never felt this way running before, maybe I was feeding off of the energy of everyone around me or maybe it was pure adrenaline. In the meantime, while we were going up the steepest hill, we had to endure mud, ice and being blasted with snow.

After the sixth mile marker, I set my own personal record of passing my previous marker in November. A sense of accomplishment came over me, but all I could think about is forging ahead to the true finish line. During the last five miles we endured more hills, carrying logs up steep hills, spider webs, barbed wire, wall climbs, fire, and long runs in which we had to avoid logs and rocks. At some point around mile eight, I started to doubt myself and began to feel minor cramps in my left calf and right quad-but I kept pushing on. I had to stop thinking, take a break to stretch out my legs, see what was in front of me, and conquer all barriers. Also, thankfully, I had my team pushing me along to finish. Once we got to the top of the last hill, all I could see was the finish line, but there was one more obstacle…Electroshock Therapy, in which we had to sprint through a total of 10,000 volts of dangling wires. After crossing the finish line, which totaled 11 miles, there was so much joy, pain, and other various emotions that I could not explain. It was such a sense of accomplishment that I have never felt before, and yet…I want to feel that again. Maybe next time, I’ll complete the course carrying a Kettlebell!

What did I take out of this experience? I came to the conclusion that Tough Mudder is 80% mental and 20% physical. Without mental fortitude and a belief in oneself, you simply won’t succeed and reach your goals. The obstacles are just something that serve to stand in your way, such as speed bumps in life, career, and personal issues that get in the way of seeing the big picture.

I would like to take a moment and thank my trainer, Neghar Fonooni, for giving me the tools and motivation, and showing me what great things can be accomplished when you train hard and stay focused. At one point during the event, I think I heard Neghar’s voice in my head yelling at me, which oddly enough was motivation. I would also like to thank my teammates, Sara and Orion, for helping me push along and fight to the end. I hope that I pushed them along as well.

So… Does this sound like fun? Are you tough enough for Tough Mudder? Who is up for joining us next time?

This entry was posted in Uncategorized. Bookmark the permalink.

1 Response to Are You Tough Enough for Tough Mudder?